TRANSIT reads with sadness over yesterday’s Sinar Harian newspaper report on how Kuala Selangor folks wait up to three hours for a bus.

Read the full report after the jump. 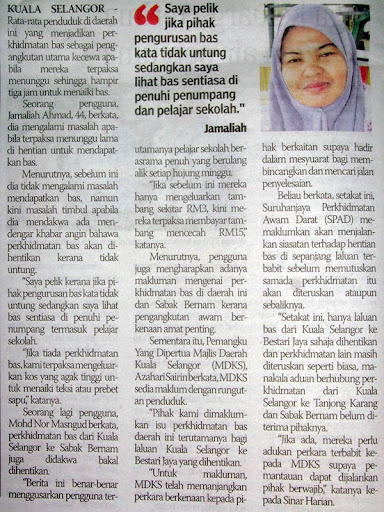 Kuala Selangor residents who got no other means of getting around other than by buses are very dissapointed on having to wait up to 3 hours for a bus. There are rumors that bus operations will cease due to operators’ unprofitable business. A resident said that shouldn’t be the case, as buses are always filled with passengers, including school goers. Boarding school students and residents had to chalk out over RM15 for taxi trips that previously cost them around RM3 if taken by bus.

The interim chair for MDKS (Kuala Selangor’s Local Council) claimed that MDKS was informed on the termination of bus services in Kuala Selangor, and said MDKS has forwarded the matter to be discussed in meetings by relevant parties.

[TRANSIT Says: Who are they?]

He said, until now, MDKS has been informed by SPAD that SPAD is investigating on the issue before making its mind whether the services should be sustained or discontinued.

[TRANSIT Says: By this statement, does SPAD echo PMBOA’s “No bus for you, village folks!” drumbeat?]

MDKS said only Kuala Selangor – Bestari Jaya route has been cancelled, and other routes are going on as usual, and MDKS has not received any complaint so far from bus users on Kuala Selangor to Sabak Bernam and Tanjung Karang routes.

[TRANSIT Says: If the most ‘localized’ mainstream newspaper in Malaysia can’t seem to steal MDKS’ attention on the problems faced by the locals, then  we wonder what will. City councils should butt out from their air conditioned offices and pay heed to the sufferings of the rate payers!]

MDKS asked complainers to bring up the issue to MDKS so that enforcement can be done by responsible parties.

Secondly, we are surprised that SPAD even consider service discontinuation as an option.

Commuters are suffering, and we wish the responses from SPAD and MDKS were more objective and constructive.

Is MDKS involved, if any, in transportation planning in its area of jurisdiction? Since SPAD is looking at the masterplan for public transportation for both Greater Klang Valley and Peninsular Malaysia,  when will MDKS and other local district governments fit into the decision making picture? Smaller towns and cities in Malaysia deserve good public transportation. TRANSIT hopes that SPAD will be forthcoming in the issue and share its plan and way forward with local governments.

The time has come for all agencies within the local, state and federal levels to possess the same level of expectation on how things will go forward, so that vague lingo terms that exudes the “okay, we hear you, and we’re going to pass the concern with you know who, yada yada yada” silo attitude be eliminated. We don’t want the balls to be passed and tossed around endlessly from one “pihak berkaitan” to another “pihak berwajib”.

One reply on “‘No bus for you, Kuala Selangor’ is never an option”

[…] this year, Sabak Bernam and Kuala Selangor lost their bus service but no one really noticed … except perhaps the people at TRANSIT and […]