For those of you who are unaware, the walkway between the stations was completed in 2006. However, the lights under the walkway and the escalators at the overhead bridge have not been working for more than 1 year.

The email and accompanying photos may provide a reason why – but of course there is no explanation for why the DBKL has allowed this to happen – and has done nothing about it.

Please read the letter and judge for yourself.

I continue to commend you and the efforts of Transit to address the problems of the mass transit system in the Klang Valley and I read your letter in one of the local newspapers — I think it was — The Star where you mentioned that the escalators up to the pedestrian walkway across Jalan Ampang outside the Dang Wangi LRT station had not been working for over a year.

Well on 26 March, 2009, I had occasion to exit the Dang Wangi station at about 2.45pm. It was raining heavily, so while waiting for the rain to ease, I decided to take a look at whether the escalator was still not working and sure enough it was not. Now that’s almost three years now as you can see in the picture attached herewith, which I have left in full resolution in case you want to submit them for publication.

However, thanks to the heavy rain, I was able to see why it was not working and why it will never work unless some expensive modifications are made — namely, that the foot of the escalator is at ground level and rain water floods its foot, as you can see from the photo below. 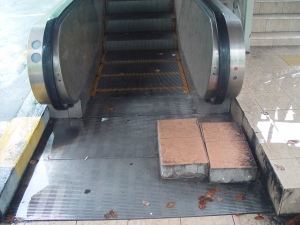 You can also see two concrete blocks placed at the foot as stepping stones for those who want to avoid getting their feet wet if they decide to walk up the stationary escalator while it is raining.

The feet of other semi-enclosed, semi-protected escalators, such as those at the Bukit Nanas, Raja Chulan, Bukit Bintang and Imbi monorail stations are elevated above ground, requiring users to walk up a few concrete steps before using these escalators which work but here, the foot and its mechanism below are flooded by the rain water.

This is a shameful design oversight of the escalators for this key pedestrian footbridge and I hope that Transit can exert its pressure and influence to get some action taken about this.

With many thanks and regards

So there you have it.

Once again TRANSIT asks – if DBKL cannot design this simple walkway properly and maintain it properly, what can be expected of the other walkways that they are planning to build?

To quote Charles Moreira once again:

Quite frankly, if the authorities or concessionaires cannot handle a simple escalator to an overhead pedestrian bridge how on earth will they handle all those air conditioned public walkways they plan to have?

I often take this bridge to avoid jaywalking the busy Jalan Ampang, and it was a pity to everyday see the escalator not working, not being cleaned, and I could even sometimes see homeless people sleeping there.
Back one or two months ago the escalators worked again (and they were clean), but it’s now back to normal, i.e. still escalators. Haiz.

Yeay, both escalators are now working again!
But you were right, there’s still residual water at the foot of the escalator closer to Dang Wangi LRT.

[…] Lights and escalator on walkway not working for 3 years […]